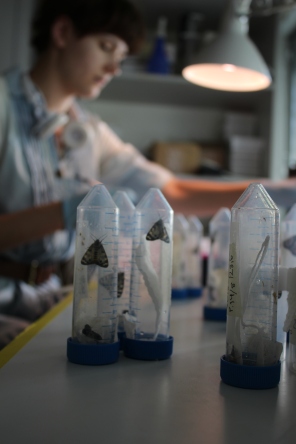 Many animals produce or sequester toxic or distasteful chemicals to deter predators. Aposematic species also advertise this protection with signals such as bright colours that aid predator learning. However, the level of defence may not be uniform across all members of a species.

The wood tiger moth produces two distinct defense fluids in response to attack. It also shows considerable polymorphism in its warning colours. In particular, males in many northern populations can be either white or yellow, with bird predators showing greater aversion to the yellow morph. In contrast, females show continuous variation from red to yellow. I am investigating the variation in chemical defense within and between the morphs, and the effect of this variation on the predation pressures experience by the population as a whole.

My project aimed to identify the chemicals used by the moths for defense, as well as how these vary within and between the sexes, colour morphs, and populations.

I collaborated with the Schulz lab at the Institute of Organic Chemistry, TU Braunschweig to identify the compounds present in the moth defensive fluids. We identified two pyrazines which elicit predator-specific aversive reactions.

I worked with Dr Bibiana Rojas and Kaisa Suisto to investigate the roles of the two defensive fluids produced by the moths, and the interaction between the colour and chemical signals in predator aversion and learning. Dr Swanne Gordon and I have been working together to study the effect of morph frequency on predator behaviour. I also used the wood tiger moth system to examine the effect of resource availability on both signal strength and chemical defence, looking for evidence of honest signalling.

My work on this system highlighted the importance of predator variability when measuring chemical defence, as well as the costs associated with the production of such defences.

For more information on this work see the Mappes lab webpage.