I decided fairly early on in my career that invertebrates were the way to go. Sure, herps are pretty cool, and I flirted with the idea of studying bats, but at the end of the day insects and spiders have it all. More importantly, who wants to spend their whole life filling out ethics forms? Thus, it was with great trepidation that I began my current work using blue tits. I’m still studying insects, but in this case I also want to look at their common predators, and that means birds.

Don’t get me wrong, I like birds just fine. I even have a bunch of pictures of me in my teens flying raptors (or more accurately holding raptors as they try to swing upside down from my glove…but I digress). I don’t have much experience with small birds though. We had a budgie growing up but that was mostly by accident. So here is an ongoing list of thing I have learnt in my foray into vertebrate behaviour:

1. Blue tits are tiny balls of rage and they will fight you.

2. No seriously, they clearly have not caught up with the evolutionary changes that have occurred since they were dinosaurs. Also they have needle sharp beaks and an uncanny ability to find the softest, most tender, part of your hand to bite.

3. They can learn fast if there are mealworms involved. Not only do they quickly figure out that food appears in the food bowl, but several of them also learnt how the tray the food bowl sits on works. This is bad because it means they can stick their tiny heads through the gap where the tray slides into the cage and steal the mealworm or moth before you even start your experiment! On one occasion I started a trial only to realise the bird had already stolen the mealworm while I was distracted setting up my camera. Other times I have to guard the tray like a hawk and shoo away little bird faces as they poke through the gaps. Interestingly, the fact that they can get so far through the gaps suggests they could probably also get out of the cages if they wanted, but it seems freedom is not as strong a motivator as mealworms. 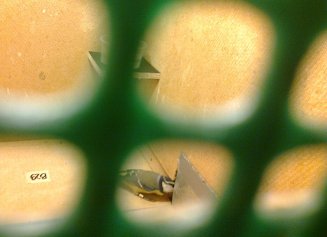 I’m in your tray… 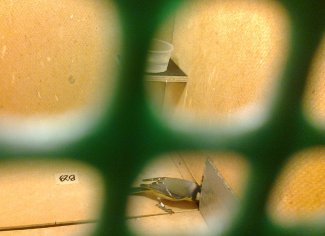 4. The protocol for catching escaped birds goes something like this:

In my experience however one (or several) of the following things actually happen:

If you can’t guess from this list of complaints I’m having a ridiculous amount of fun. I still can’t quite believe they pay me to do this, but long may it continue.

Note: No birds were harmed in the making of this blog post. Many mealworms were though.

I used to be BugPhD, but I finished and moved on to insects new. View all posts by MothProf